The Grendel RA-9 Grenadier. Released by Rare Waves in 2015. A unique semi modular CV-Gate synthesizer with analog sequencer and filterbank.

The Grendel RA-9 Grenadier is a 1-oscillator analog monosynth with CV-Gate control. It has a semi-modular design in a tabletop enclosure with 1/4″ audio output. The Grenadier can be played stand-alone by using its keypad with 4 independently tuneable keys, or you can activate its onboard sequencer for minimal rhythm loops and tone sequences. Patch in a 1v/oct MIDI-CV converter (not included) and the Grenadier can play sequences from a MIDI workstation or computer.

The Grenadier’s unique palette of analog tones comes from its triple bandpass filterbank with syncable modulation. Its voice is designed for electronic basslines and melodic sequences, as well as slow drones, electro percussion loops, bass drums, and more. The filterbank can also become a tone source by setting it to self-oscillate with warm low frequency overdrive.

The Grenadier’s VCO offers square and triangle waveform. Its pitch can be modulated by the envelope generator for bass drops and other tuned analog percussion effects. The VCO waveform is synced to gate, for better bass output with staccato sequences.

The decay envelope generator offers a wide range of decay times up to 60 seconds. The contour of the envelope can be reversed with the bipolar Envelope Depth knob, putting it solidly in the electro funk zone. The Grenadier’s LFO covers a wide range of 0.05 Hz (that’s once cycle every 20 seconds) up to 60 Hz, and can be reset by gate events for tempo-sync effects.

The patch bay allows semi-modular control and multiplies the creative options when patching to itself, another Grenadier, MIDI-CV converters, and modular systems.** Fourteen patch points are provided including CV and gate in and out, clock in and out, LFO rate CV, and external audio input. It accepts Eurorack-type 1/8” (3.5mm) mono phone plugs.

The Grendel Grenadier has a straightforward knob-per-function layout that avoids confusing context-sensitive controls. Each switch on the front panel has a red status LED that is easy to see, but not glaringly bright. The case is built of laser-cut steel with durable powder coat and silkscreened graphics. It has a sturdy-feeling build, weighing in at nearly 2 pounds. Grippy rubber feet elevate it above the table, and a pair of polished metal handles double as a roll cage to protect its control surface.

The Grenadier is built to satisfy the need for creative analog equipment that stands the test of time.

How does the Grenadier’s sequencer work?

The sequencer has two basic components:

Its 4-step analog sequencer outputs control voltage in a repeating cycle I-II-III-IV. Voltage of each step is controlled by the knob above each key I-IV. It steps once to the right each time it is triggered. The analog sequencer normally controls the VCO frequency for simple melodic sequences, and can be patched to sequence the filterbank, LFO rate, or an external module.

The other component is the programmable trigger loop. It is normally synchronized to the LFO, or you can patch 16th-notes tempo clock to CLK IN. Program a rhythmic sequence of events in a 32-step (2 measure) endless loop by tapping the PROG-+ button in real time. Your input is quantized to the clock and repeats as long as clock is present. The trigger events can step the analog sequencer, trigger the envelope, or trigger an external module using the TRIG OUT patch point.

Briefly stated, the Grenadier’s onboard sequencer is good for minimal rhythms and melodies constrained to a 4-note cycle. It does not have start/stop or reset input, presets, or programmable melody.

What can the Grenadier’s LFO do?

The LFO rate can be controlled with the LFO CV IN patch point. Its response is exponential (~0.5v/oct) and its frequency range is 0.05-60 Hz. The symmetry of the triangle wave is variable and the pulse wave output can be varied from 20..80% width by using the Symmetry knob. Activate the TRIG button and the LFO will sync (restart) with each gate event. This can give the impression of tempo-synced LFO effects, and also lets you use the LFO like a second envelope generator for the filterbank. The LFO Depth knob sets the level of filterbank modulation, and is a bipolar gain type control. The LFO Out patch point is post-LFO Depth. The CLK Out patch point normally sends unattenuated LFO square wave.

Is the Grenadier a little bit like the Grendel Formant Filter?

Is the Grenadier a little bit like the Grendel Drone Commander?

Yes, it is true in some ways. Grenadier can mimic the Drone Commander’s LFO and envelope modulations. The Drone button cancels the volume envelope for endless sustained notes. And its filterbank can be driven into deep-pitched overdriven self-oscillations. The Drone Commander has two fixed oscillators, while the Grenadier has one VCO. But the Grenadier goes further with the addition of a VCA and envelope generator, plenty of CV connections, and a minimal onboard sequencer.

Can it ‘talk’ to the Drone Commander?

What are the Grenadier’s CV patch points for?

** Is the Grenadier compatible with Eurorack systems?

Yes, but not 100%, because the Grenadier’s inputs and outputs work within a 0..+5 volt range only. Some Eurorack modules such as LFOs which send bipolar signals may not work as expected (negative voltages are limited to zero volts). The Grenadier has internal protection so there is no risk in experimenting with patching it to other synthesizer equipment. It uses Eurorack-type 1/8” (3.5mm) patch cables. Patching an attenuator module between a Eurorack output and Grenadier input may be useful.

Does the Grenadier run on battery?

No, there is no internal battery. However for convenience its DC input can accept either tip positive or tip negative AC adapters. You can daisy-chain it with FX pedals or other tabletop MIDI gear powered from a 9- to 12-volt adapter. 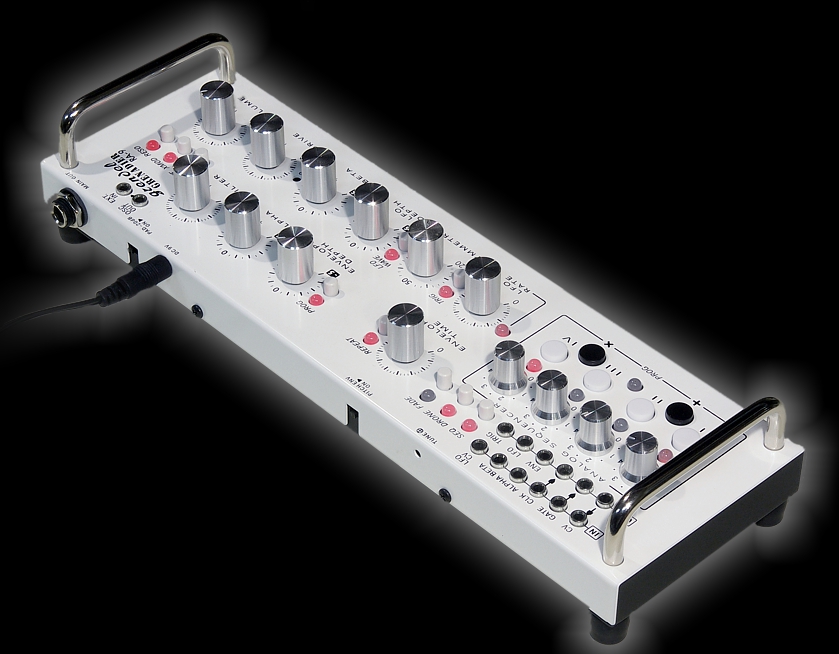