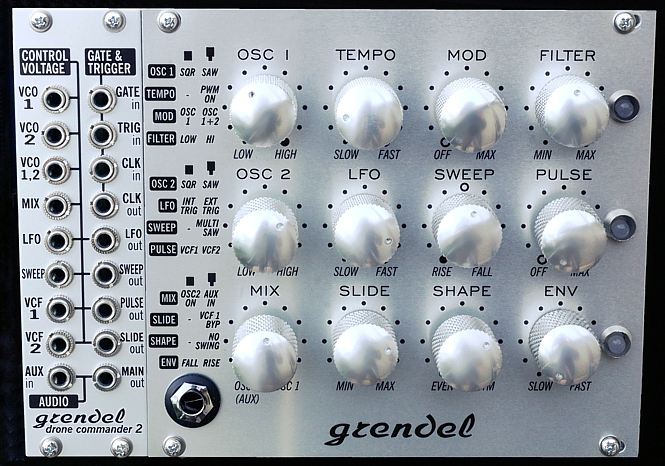 Rare Waves LLC USA is pleased to introduce a new analog synthesizer descended directly from the much-loved Grendel Drone Commander classic: the DC-2e Drone Commander 2 + Expander in Eurorack modular format. Much more than a re-packaged clone of its parent, DC-2e begins where the previous version left off.

Grendel Drone Commander 2 is a true analog music instrument built with extensive use of discrete transistor technology. Its minimalist control panel presents twelve solid metal knobs, and every one doubles as a push-pull switch to modify the tone in thousands of possible combinations.

Behind the panel is a newly designed all-analog sound engine with two oscillators, two filters, an envelope generator, and a comprehensive LFO section capable of producing four simultaneous waveforms.

We’ve built in a number of features that can’t be found anywhere else, making DC-2e a unique and highly playable tone source for drone music, leads, bass, and sound effects. This model speaks up with an especially gnarly baritone voice and loads of bass. Its simple knob-per-function layout frees you from memorizing button-press sequences.

Play the Main Module on its own, or add the Expander for lots of patching options including CV/gate/clock inputs.

Grendel DC-2e Standalone is also available in its own custom 35HP Euro case!

The system’s heart is the Main Module, which houses the synthesizer’s core and all of its controls. On its own, the Main Module embodies the classic Drone Commander playing style, with manually tuned oscillators and a ¼” audio output for direct connection to your mixer, FX, or amp. A tough steel chassis protects its guts against knocks and interference from other stuff living in your synth case.

Grendel DC-2e’s Main Module needs 78 mm of clearance behind the mounting rails.  That means it fits most desktop consoles, and some suitcase/attache style cases, but not the boat/skiff type enclosures.  For reference, here is a list of Eurorack cases including their depths: Eurorack cases suitable for Grendel DC-2e

DC-2e Main Module, side and back view

With the optional Expander module, the system gains eighteen patch points for CV, gate + trigger, and audio. Its clock input allows synchronization to analog clock sources, and AUX IN lets you process external audio sources. As a bonus, the voltage ranges of some of the inputs and outputs can be switched between +/-2.5 volts and 0..+5 volts, facilitating connection to other synth modules, MIDI-CV converters, and various tabletop analog gear.

DC-2e Expander Module, side and back view

A TALE OF TWO FILTERS

The predecessor was known for its colorful filter, which DC-2e retains nearly exactly. The original filter (VCF 1) stands out with a tone-bending nonlinear bandpass effect, low frequency self-oscillations, subharmonic generation, and crusty overdrive.

To complement this harmonic-generating power, DC-2e adds another analog filter to the signal chain: a 4-pole low pass filter with discrete transistor technology (VCF 2). It is positioned in the signal chain to subtract high frequency detail from the original filter, with warmth, cleanliness, and precision. Resonance (Q-factor) of the 4-pole filter is variable with a trim control on the side of the module (self-oscillation not possible).

When a more basic tone is needed, VCF 1 can be bypassed (by pulling up the SLIDE knob), sending DC-2e’s oscillators directly to the 4-pole filter.  This yields the classical timbre of two VCOs going through a -24dB/oct LPF.  While in this mode, you can still adjust VCF 1 for self-oscillation, employing it as a third tone source for harmonious chords, or modulated for cosmic sine wave sound effects.

An envelope generator is built in, sweeping the 4-pole filter’s center frequency between full cutoff (<20 Hz) to fully open (>20 kHz), functioning as a low pass gate. It produces linear attack-release envelopes with equal rise and fall time. Pull up the ENV knob to open the gate, and push to close the gate (or patch a gate signal to the Expander). This creates smooth crescendos, slipping in and out of your mix with subtle evolving harmonic detail.

Its range of attack/release times is 0.25 to 35 seconds, reflecting its bias toward slow sounds. One should note that the internal envelope generator isn’t intended to create zero attack time sounds of staccatto, blippy, pizzicato character. (It’s a Drone Commander, after all). Regardless, with the Expander, you can patch an external envelope to the VCF2 CV input for more sophisticated ADSR control of DC-2e’s low pass gate.

WAVE TO THE OSCILLATORS

The signal chain starts with a pair of voltage controlled sawtooth-core oscillators, which are tuned manually with the OSC 1 and OSC 2 controls. The MIX control sets the blend. Push-pull switching lets you choose sawtooth, square wave, or an excellent pulse-width modulated waveform. The PWM effect comes from a special LFO section that is independent of the main LFO. It generates the sum of two low frequency sine waves at fixed frequencies. This uncommon configuration gives the PWM waveform a tone reminiscent of the beating effect of a unison guitar chord – always changing, yet without a dominating tempo or rhythm.. and once the filters go to work on it, the results are quite nice.

The following demo features the PWM waveform… The oscillators are tuned in 5ths, and the main LFO is off. Recorded with EQ, reverb, echo FX, and overdrive from the mixing board preamp (StudioMaster Diamond) is added halfway through the track. Played on a MIDI keyboard with MIDI-CV converter patched to the Expander module.

Pulling up the MIX knob mutes OSC 2, and with the Expander connected, this selects AUX IN to process external audio sources.

The LFO section of DC-2e brings a completely revised approach from the classic model, yet is capable of duplicating the hallmark slow filter sweeps decorated with rhythmically quantized pulse wave details. A broad range of syncopated, polyrhythmic, and swing-time modulations are available to be morphed endlessly in real time with the TEMPO, LFO, SWEEP, PULSE, SLIDE, and SHAPE controls.

The video below displays the Sweep and Pulse waveforms on an oscilloscope, illustrating the evolution from simple to complex modulations. The top trace is Sweep, and Pulse is the lower trace.

It all starts with the TEMPO knob, which sets the basic pulse rate, typically 1/8th notes. The LFO control generates a sawtooth waveform whose frequency is always quantized to the tempo, like a clock divider. LFO depth to the filter is set by the SWEEP control. It is a bipolar control, allowing smooth transitions between rising and falling filter sweeps.

More than just a simple back-and-forth square wave, the pulse wave is a unique rhythmic effect that combines square wave-like steps with linear slope line segments.  The pattern can be shaped in subtle ways by varying the SLIDE, SHAPE, and LFO controls. It is almost a sequencer in itself, and these modulations can be applied to either the filters or VCO pitch. The PULSE control sets the depth of filter modulation, and the MOD knob controls VCO pitch modulation.

Or, cancel all modulations by switching the LFO off completely.. simply turn the TEMPO knob to its slowest setting, and the LFO enters a quiescent state.

What about the SLIDE control? The slide function employs a separate clock divider to give DC-2e’s LFO an extra layer of rhythmic modulation. The slide is a linear ramp waveform that controls a special voltage controlled crossfader within the LFO section. By crossfading the PULSE waveform with a phase-inverted version of itself, this unique effect adds syncopation and polyrhythmic enhancement to the PULSE waveform. (Confused yet? ..see the demos) A slide is triggered at the start of each LFO cycle, and can also be triggered externally from the TRIG IN patch point on the Expander Module.  The SLIDE knob sets the duration (time constant) of the slide effect.

The pitch modulation effect of the SLIDE and MOD controls is featured in the following demo.. DC-2e is paired with a Roland TR-808, using a DAW as the master clock. A Doepfer MSY-2 MIDI-Sync converter is controlling the 808, and a Vermona QMI MIDI-CV converter is clocking the Grendel DC-2E.

Or, go back in time to the classic Drone Commander LFO waveforms by canceling the SLIDE – this is done by simply pulling up the LFO knob.

There’s one more thing before we take a coffee break! The SHAPE knob controls both the PULSE effect and the SLIDE effect. The duty cycle (swing ratio) of the PULSE waveform is adjustable from 50% to 95%. The symmetry of the SLIDE effect is also controlled, making the rise time shorter and the fall time longer. 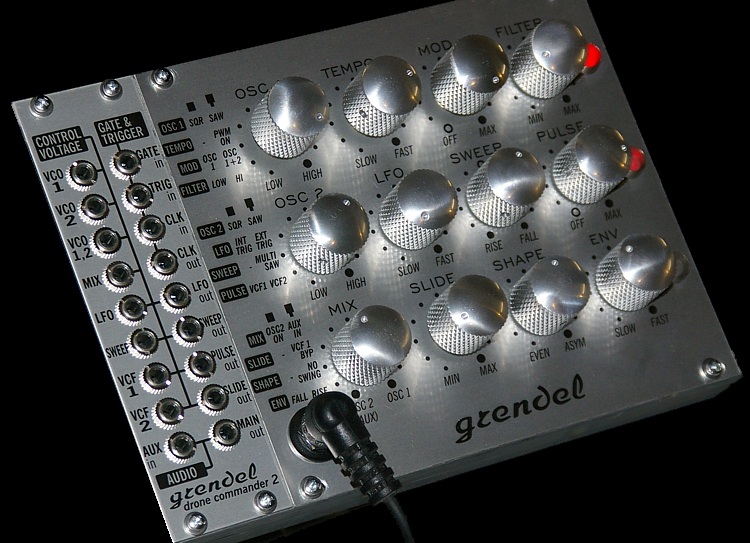 ABOUT THE DEMO RECORDINGS

All of the demo recordings featured here were created with the Grendel DC-2e + Expander as the only sound source, with no other modules connected except a Vermona QMI MIDI-CV converter.  (Drum tracks made with an Alesis D4 and Roland TR-808).

Line out from the DC-2e was sent to a mixing board, and recorded on a DAW.  A light amount of effects (reverberation and delay) were added with Yamaha SPX1000 and Korg SDD-1200.  In a few cases, some of the heavier fuzz tones were produced by overdriving the channel preamp in the mixing board (StudioMaster Diamond) and applying EQ.  Some of the demos have been overdubbed with 1 or 2 additional layers of sound from DC-2e.  Other than that, the recordings are basically ‘dry’ output.

The demo recording below features the DC-2e Main Module (Expander not used), and additional filtering by the Grendel Formant Filter.

All of the patch points on the Expander Module are protected against damage from short circuits and over-voltage.

Q. Will there be a stand-alone (non-Eurorack) version of Drone Commander 2?
A. Yes, and it may be announced in 2016.  Thats all the news for now.

Q. Will there be versions of DC2 in other modular synthesizer formats?
A. Maybe, but only after the appearance of a stand-alone model. Its not highly likely.

Q. Are there custom finish colors and features available?
A. No, sorry.

Q. The DC2e LFO doesn’t have a 2-4-8-16 switch. What does that mean?
A. DC-2e can reproduce the same metric divisions as Drone Commander classic, if you listen carefully while adjusting the LFO control. The LFO control acts as a clock divider that is not limited to four choices. Also, the random fluctuations in tempo when changing LFO rate that were characteristic of the old model are not present in DC2. In other words, it is now much easier to set the tempo to match an external rhythm. If you like the sound of random behavior, just wiggle the TEMPO knob.

Q. If I just have the DC-2e Main Module, can I control it with CV-Gate, or MIDI, or ..?
A. The Main Module alone is controlled only by manual tuning and manual gate control with the ENV knob switch.